How to turn your big idea into a minimum viable product. 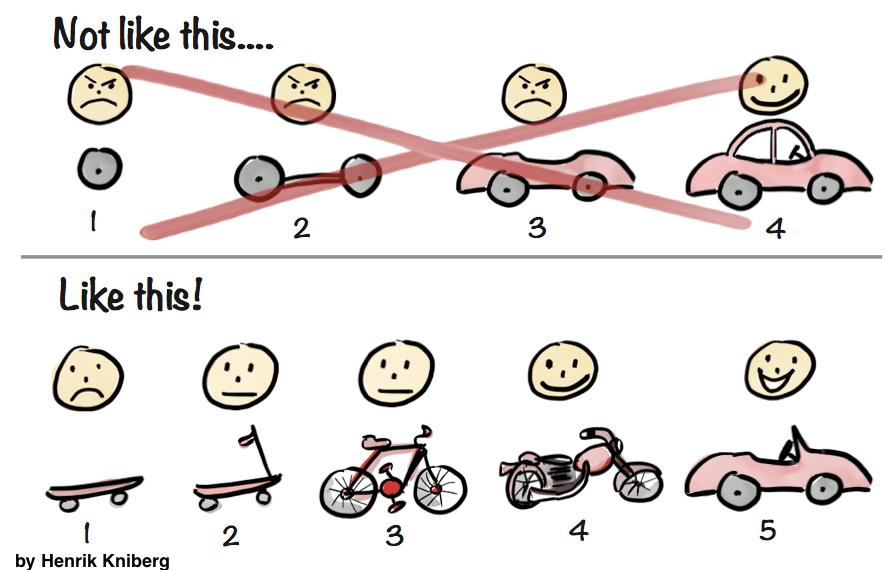 In startup circles, people love to talk about the “MVP,” or minimum viable product.

That’s because starting by building an MVP, as opposed to building a fully-featured product, gives you a lot of advantages:

The MVP is a good thing, and as an agency, we spend a lot of time helping new clients fine-tune their “big idea” into an MVP to start with.

But there’s a dangerous misconception about the MVP.

An MVP is NOT a “Smaller Version” of Your Product.

Many people assume that an MVP is simply a pared-down version of the product you want to build.

And so to come up with an MVP, they’ll start with a “wish list” of features, and try to decide which features to cut in order to build an MVP.

This approach, however, misses the point of an MVP, which is to validate that your market has a problem that they want to have fixed for them, not to validate a feature set.

Your list of features, pared down to two or three, might not actually accomplish that, as this cartoon illustrates nicely:

## A good MVP focuses on the problem and the solution, not on features.
For example, if you wanted to build an on-demand dry cleaning pickup and delivery app, you could either:

Build a mobile app with limited features (even though the bulk of of the cost of the app will likely be building its core, not the extra features).

Set up a simple SMS relay to let people text their pickup location to you, and iterate from there.

Which approach do you think would be a more cost-effective way to validate whether or not people will use a product to solve this problem?

**How to Fine-Tune Your Product Idea Into An MVP**

The most useful thing you can do when thinking about the first couple iterations of your product is get into a true MVP mindset.

That means abandoning the thought of “which features do we want to build first?”

And approaching the process by asking: “what’s the most basic way we can solve this problem and deliver value to validate our idea?”

Your MVP, as in the example above, might look very different from your grand product idea, and that’s okay, because the feedback and insights that your MVP provide you will save you tens of thousands of dollars, if not more, over the course of the development process.

To start this process, I like to put any feature wish lists aside and ask a simple question: what’s the goal of this product?

That can change your MVP in a profound way.

Consider Twitter. Here’s an excerpt from the TechCrunch article that was published when they launched their MVP:

“Odeo released a new service today called Twttr, which is a sort of “group send” SMS application. Each person controls their own network of friends. When any of them send a text message to “40404,” all of his or her friends see the message via sms. This launched officially today, and a few select insiders were playing with the service at the Valleyschwag party in San Francisco last night.”

But it was a crude way to test their “big idea” of short-form social networking. The learning that came from that MVP led to the iterative development of the product that nearly 300 million people use today.

So instead of “trimming” your idea down, try:

You may not even need an agency or development team to build your first MVP.

It’s not the approach that will get your dream product built tomorrow. But it’s the best way to build the best possible product, and turn that product into a successful business.